When it comes to the elderly population and vision issues age-related macular degeneration is the major cause of irreversible vision loss. There is no exact explanation of how age-related macular degeneration occurs and what causes it. It is speculated in the medical community that it could be caused by age-related changes and oxidative stress that results in cellular damage. When cellular damage occurs it is then aggravated by immune and inflammatory responses. If the inflammatory response is chronic this can lead to other eye issues such as retinal atrophy and angiogenesis.

What Is Periodontal Disease

The Association Between Periodontal Disease And Advanced Macular Degeneration

There was a recent study done in Finland that was a cross-sectional and included 1,751 individuals. The study showed that periodontal disease made male individuals more susceptible to developing advanced macular degeneration. There was a second study done which was also cross-sectional in the United States and the study was called the National Health and Nutrition Examination Survey. This study was done on close to six thousand individuals but it included graded retinal photographs and periodontal data. The results from this study were very similar to the results of the Finland study. The only difference was that the survey did not pinpoint one particular sex who was more susceptible. A doctor by the name of Wagley studied the results carefully from the National Health and Nutrition Examination Survey.  Wagley concluded that individuals who were 60 and under had an increased risk of developing advanced macular degeneration disease if they had periodontal disease regardless of sex. The study also showed that there was no relationship between the two when it came to individuals who were older than 60.

When it comes to the subject of if periodontal disease gives individuals an increased chance of developing advanced macular degenerative disease studies have shown that this is a strong possibility of being true. The Finland study stated that this would only happen in males and does not affect females. The study that was done in the United States was in agreeance with the Finland study in the area periodontal disease giving individuals an increased chance of developing the advanced macular degenerative disease. The difference between the two studies was that the United States’ study stated that their information found that all individuals who were 60 and under equally had the chance of experiencing this regardless of sex. So it is obvious that maybe more testing and studies have to be done to truly see if this affects the males only or if it affects both sexes equally.

Need to get your teeth checked by a professional?
Consider contacting your dental offices in San Marcos TX.

If you would like to request an appointment, use our appointment request form instead.

Latest News from Our Blog

The Connection Between Diet and Oral Health

Regarding oral health, diet is an integral part of the equation. If you’re exposed to bacteria or food particles while brushing your teeth or snacking, they can get trapped between your teeth and gums. The bacteria could then grow within the crevices of your teeth or gums between brushings, leading to tooth decay or cavities. Dental Caries Dental caries is a disease of the teeth that begins when harmful bacteria, food debris, and sugars adhere to the tooth surface. Dental Plaque (a soft, sticky, colorless film) constantly forms on teeth and thrives in an environment with certain conditions: a lack of fluoride, frequent snacking or eating sugary foods, poor brushing, or no brushing during the day.These conditions can lead to tooth decay and cavities by causing acid erosion of the enamel faster than it can be repaired. Processed Foods and Tooth Decay From a fundamental scientific standpoint, there’s a strong connection between cavities’ development and processed food consumption. While many factors determine whether a person will develop cavities, such as genetics and oral hygiene, processed foods can play a significant role in the bacteria that cause tooth decay. In particular, these foods’ “refined” nature reduces their nutritional value and makes […]

Healthy Teeth Habits to Strive for This Year

It’s a new year, so it’s time to start making healthy lifestyle changes. One important thing you can do for your overall health is to care for your teeth. Poor oral hygiene can cause serious health issues, so it’s important to make sure you’re taking steps to ensure your teeth stay healthy and strong. Here are some healthy teeth habits worth striving for this year: Brush Twice a Day Brushing twice a day is the key to good oral hygiene. Make sure you brush for two minutes each time and use a soft-bristled brush with fluoride toothpaste. Floss Daily Flossing helps remove plaque in your teeth that normal brushing can’t reach. Use waxed dental floss to make it easier on your gum line, and take your time while flossing so that you don’t miss any spots. Use Mouthwash Regular use of mouthwash helps reduce plaque buildup and freshens your breath. Make sure to read the label carefully when choosing a mouthwash, as some contain alcohol that can be drying to your mouth. Use toothpaste with fluoride; it helps strengthen the enamel, making your teeth less vulnerable to decay. Eat Healthy Foods Healthy foods like fruits, vegetables, and whole grains can […] 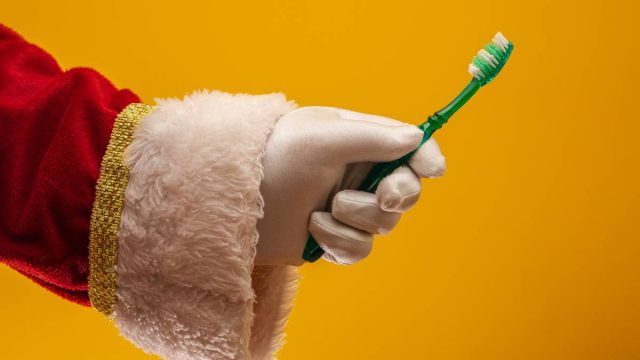 Tips to Keep Your Teeth Healthy During the Holidays

Healthy Teeth are one of the most important aspects of a healthy life. Knowing how to take care of your teeth can help you preserve them for years and years instead of having to look forward to dentures. To help you maintain healthy teeth during the holidays, we’ve compiled a list of some tasty tips that will keep your smile happy and healthy below. Keeping your teeth healthy during the holidays is critical, and these recommendations should prove helpful. Avoid Foods with Sugar Content When it comes to maintaining healthy teeth, sugar is the worst. Just about any sugar-rich food will disrupt your oral health and can cause cavities as well as plaque build-up. So if you’re celebrating the holidays with family and friends, we recommend steering clear of sugary food items. If you fear having a sugar problem, clean your teeth with hydrogen peroxide after every meal and snack. Eat Healthily If you’re going to be around people who eat unhealthy, junk, or rotten foods, or if you want to limit the sugar content of your food intake, we recommend eating healthy in general. This will not only help to improve dental health, but it can also help keep […]

Many people fear dental visits because they have been traumatized by past experiences. This can lead to avoiding the dentist and not getting checked for cavities, pulled teeth, or other problems that can only worsen if left untreated. While it’s important for everyone to get all the dental care they need, people shouldn’t have to suffer any more than necessary due to an irrational fear of dentists. Here are some tips for overcoming dentophobia. Understand Your Exact Fears While dentophobia is common, not everyone experiences it for the same reasons. One common reason is known colloquially as “cavity phobia”. Cavities are characterized by tooth decay and loss of minerals within the teeth that weaken the teeth until it breaks or cracks apart. Cavities are often referred to as a cavity, tooth decay, or dental caries, and they can be treated by either filling them with resin or pulling the tooth out. Before you set out to overcome this fear, you must learn what you are afraid of and why. Make an effort to understand your exact fears and why you have these fears. Find the Right Dentist for You Your dentist will play an essential role in your oral health […]

Our goal is to make you feel at home and as comfortable as possible in a dental office.

We won’t market any products or persuade you into treatments you don’t want.

For the Whole Family

General care to meet the needs of every patient, big or small.

All rooms have views of the outdoors, where you can see birds and other wildlife.

We make every effort to meet your unique needs in a loving, caring manner.

From root canals to treatments for several common problems.